On this page, in reverse chronological order, are photos showing Social Action Team activities. Some of the photos are stand-alone, and others are in slideshows. Click the arrows on the sides of the slideshows to display the next or previous photos.

A number of UUs attended the Solidarity Rally at the Boone County Courthouse Square and the following march on Saturday, Jan. 18, 2020. It was difficult to see who, exactly, was there as everyone was bundled up against the biting cold wind. Rev. Molly delivered a poetic keynote speech. The Social Action Team was a co-sponsor of the event.

The Social Action Team coordinates serving dinner at Loaves and Fishes on the third Sunday each month. The photos below were taken when our volunteers served dinner on Nov. 18, 2016. 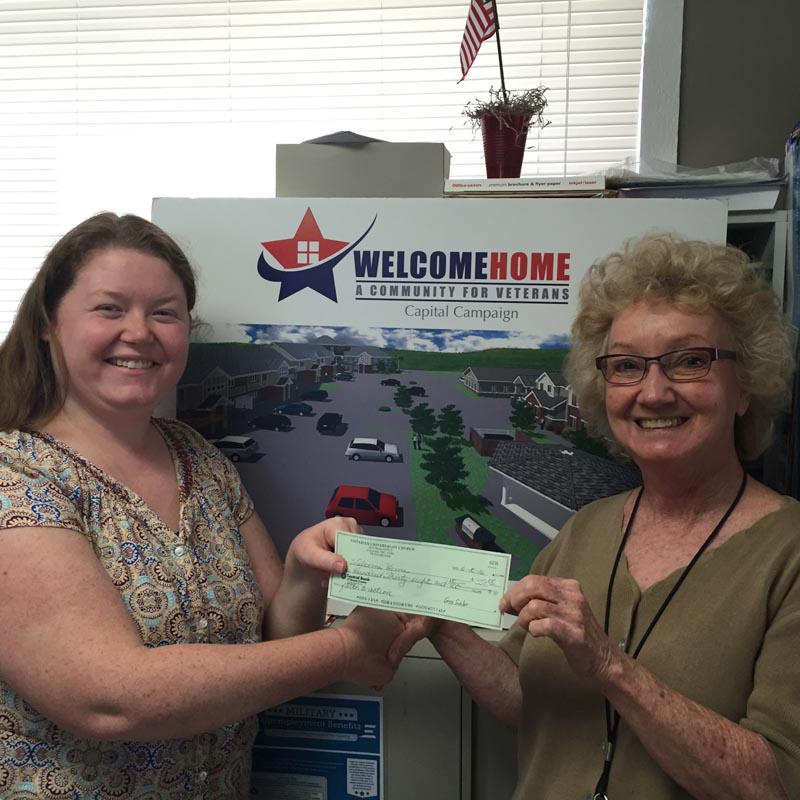 The Social Action Team organizes church volunteers to serve the dinner at Loaves and Fishes on the third Sunday of each month. Loaves and Fishes was started in the mid-1980s by the St. Francis Catholic Worker community and serves a free community meal seven nights a week from 5 to 6 p.m. in the basement at Wilkes Boulevard United Methodist Church in partnership with that church and more than 20 other local faith communities and other organizations. Some of the participants on July 19, 2016 are shown in the photo below.

On March 31, 3016, five members of our congregation (see photo slideshow below) joined PROMO to protest Senate Joint Resolution, an anti-LGBT and pro-religious rights constitutional amendment that has already passed the Senate and awaits a House of Representatives vote. If the House approves, the measure will go to the voters.

The amendment would “allow organizations and private businesses that provide wedding services to use religious beliefs in order to legally refuse service to same-sex couples. This includes bakeries and florists, but it could also include restaurants for your reception or dinner rehearsal or craft stores for your supplies,” according to PROMO’s executive director, Steph Perkins.

At the rally, Janice Smith, Barbara Carter, and Tara, Jackie, and Evie Marcink helped hand over 4,000 petitions to Rep. Elijah Haahr, the Chair of Emerging Issues, to give House Speaker Todd Richardson. Richardson has the power to prevent the amendment from being voted on in the House.

Our goal as activists is to pressure our politicians to do the right thing for Missourians. While we value religious freedom, that is already protected under the First Amendment. While our members were at the Capitol, they also rallied with signs calling out homophobia and transphobia and urging Speaker Richardson to stop the vote.

While the amendment is still on the table, PROMO will be hosting more Equality Day events and rallies at the Capitol. Join them April 20, 2016 for the next Equality Day to rally and talk directly to lawmakers.

On March 29, 2016, Allie Gassmann, representing the Social Action Team, presented a Faith-to-Action Collection check to the board of the Centro Latino in Columbia. Centro Latino offers various services to the Latino community and to the immigrant community at large, including health promotion classes, help with accessing health services, translation, legal services, after school homework help for school aged children, English classes and Spanish classes. The amount of the Faith-to-Action Collection for Centro Latino was $739.

The UUCC Peace Building Team and the Anti-Racist and Justice Team of the Social Action Team co-sponsored a Non-Violent Communication Workshop on Sunday afternoon, Jan. 24, 2016. The workshop taught non-violent communication skills that help make life and relationships more wonderful. Andrew Twaddle provided the slideshow photos below from the workshop. All photos ©2016 Ansar Actograph.

UUCC members participated in the annual Dr. Martin Luther King, Jr. Annual Candlelight March and Memorial Celebration on Jan. 18, 2016. The march began at 6:30 p.m. at Douglass High School and proceeded to a memorial celebration at Second Baptist Church. Andrew Twaddle provided the photos in the slideshow below. All photos ©2016 Ansar Actograph.

For the fourth year in a row, thanks to an anonymous donor, UUCC was a top-level “Champion of Diversity” sponsor of the Columbia Values Diversity Celebration breakfast. As was the case last year, UUCC was the only church at that level of sponsorship. The Social Action Team organized our participation in the annual event, which was held in the Expo Hall at the Holiday Inn Executive Center on Thursday morning, Jan. 14, 2016. UUCC representatives were seated at three tables at the breakfast. They are pictured in the following slideshow photos taken by Steve Scott.

Andrew Twaddle provided the photos in the following slideshow that were taken at the Dec. 6, 2015 SAT meeting. All photos ©2016 Ansar Actograph.

The health clinic in El Pital, Honduras, is under constant threat of closure from the health department of the state due to its disrepair. The villagers have made some good progress so that the clinic is currently open.

In its continuing effort to support the villagers in their efforts, the SAT’s Honduras Group hosted the viewing of the film “Jaula do Oro” (“The Gilded Cage”) on December 5 at 4:30 p.m. at the church. The movie follows four Guatemalan children as they try to make their way through Mexico to the USA. The filmmaker spent a long time along the migration routes and based his film on what he saw and experienced, using children he met there as his actors. The film is a gut-wrenching depiction of the reality of what so many migrants face and have faced.

On Monday, Nov. 30, 2015, the Social Action Team and other members and friends of our congregation participated in a vigil and rally on the MU campus to implore Chancellor Foley to restore the physician privileges necessary for Planned Parenthood’s license to perform safe and ethical abortion services here in Mid-Missouri.

Eleven UU’s were present for the event in the cold, drizzly rain, including Rev. Molly who spoke a powerful message.

We gather in the shadow of terrorist violence against the Planned Parenthood Health Clinic in Colorado Springs, with prayers in our hearts and on our lips for the three individuals killed, the nine injured, the many more traumatized, and the providers and responders in Colorado and across our nation who work daily under threat of such violence.

As we share these prayers, and as health clinics across the country open their doors to all who need them, even in the shadow of such violence, the Planned Parenthood motto comes into sharper focus than ever before: Care, no matter what.

Care, no matter what.

Here in Mid-Missouri, Planned Parenthood’s promise of care is under threat, not by terrorists, though God knows our providers have faced their share of threats, but by our own senator Kurt Schaefer and a legislature who routinely put political expediency before the health of vulnerable Missourians, and by a University that has allowed itself to be bullied and pressured by that legislature.

Our legislature has refused for almost 4 years to expand Medicaid to 100,000 Missourians who desperately need care, and now they have bullied the University of Missouri into breaking important training ties with Planned Parenthood and revoking essential and legal physician privileges.

The reality they have created – that in a few days, women and people of all genders who need abortion services will no longer be able to receive them in Mid-Missouri – is a threat to the core mission of Planned Parenthood and their compassionate providers, who have promised care, no matter what. And it is a threat to the dignity and health of Missourians.

Because here is the reality: sometimes, people need abortion care. Sometimes, abortion is a hard, good, and moral choice that women and people of all genders make as moral agents formed in the image of the divine.

I join those gathered here today in calling upon Chancellor Foley to restore the physician privileges necessary, and Senator Schaefer and other legislators to end their political posturing, so that Mid-Missouri’s courageous and committed providers can fulfill their moral, ethical and legal mission to provide care, no matter what.

At 7 p.m. Friday, Nov. 20, 2015, our Social Action Team’s LGBT activism group sponsored a local observance of the Transgender Day of Remembrance at UUCC. The candlelight vigil and memorial was attended by 21 people and was facilitated by Tessa Summers, Jackie Marcink and Rev. Molly.

The observance included a candlelight vigil for the 21 beautiful souls who were brutally murdered this year and the countless others lost to suicide. This was an important time for our church to stand in support and solidarity with the transgender community.

Transgender Day of Remembrance (TDOR) is an annual observance on Nov. 20 that honors the memory of those whose lives were lost in acts of anti-transgender violence. Additionally, during the week preceding the observance, individuals and organizations around the country participate in Transgender Awareness Week to help raise the visibility of transgender and gender non-conforming people and address the issues these communities face.

TDOR was started by transgender advocate Gwendolyn Ann Smith as a vigil to honor the memory of Rita Hester, a transgender woman who was killed in 1998. The vigil commemorated all the transgender people lost to violence that year and began an important memorial that has become the annual observance.

There were numerous TDOR observances around the country on Nov. 20, including several others in Missouri. See a list.

Thanks to Andrew Twaddle for the photos in the slideshow below showing participants in the Social Action Team meeting on Nov. 8, 2015.

The SAT organized church members and friends to participate in the annual CROP Walk/Run. 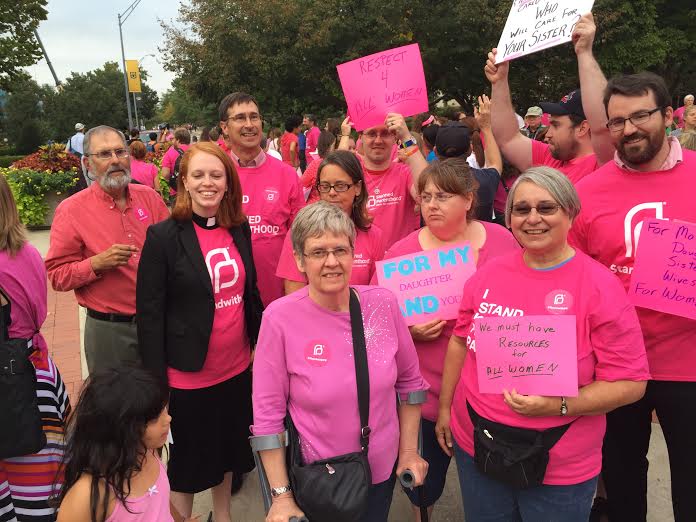 In April 2017 our members voted to become a Sanctuary Congregation. Read more.

We Love Our Neighbors

The Rainbow Chalice is emblematic of our recognition by the Unitarian Universalist Association as a Welcoming Congregation for lesbian, gay, bisexual, transgender and queer persons. Read more.